Top 10 of the most beautiful architectural works in Colombia

Colombia is a country with varied landscapes. Its architecture follows this trend and we can observe the evolution of the generations through their constructions. From colonial houses to gothic places of worship including skyscrapers, Colombia’s architectural richness is one of the most important in the world. 1.  Colpatria Tower  (Obregón,Valenzuela & Cía.) – Bogotá, 1979 The highest tower…

Colombia is a country with varied landscapes. Its architecture follows this trend and we can observe the evolution of the generations through their constructions. From colonial houses to gothic places of worship including skyscrapers, Colombia’s architectural richness is one of the most important in the world. 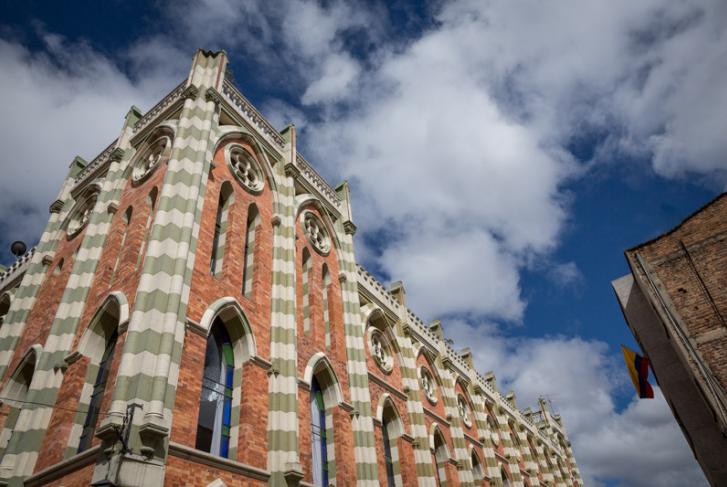 The highest tower in Colombia, the Colpatria Tower offers a panoramic view of the capital. Its 48 floors (196 meters high) make it the most impressive building on Bogota’s skyline. Located on the Septima, the Colpatria is in the heart of the city.

This neo-Gothic fortress located between Carrera 4 and Carrera 2 in the historical center of La Candelaria is today a housing complex. It stands out from the traditional colonial facades thanks to its red bricks contrasting with its white and gray striped columns. A symbol of the historical heritage of Bogota, this residence is worth a visit.

The Park’s Towers were designed to match the shape of the bullfight arenas and create a certain architectural harmony. Today, this residence bordering the Park of the Indépendance, intends to be a public place. Passers-by walk through it at ease. There is no gate or barrier.

National Library of Colombia and one of the best in Latin America, the Luis Angel Arango Library was created by the Bank of the Republic of Colombia in 1958. It is located in the historical center of Bogota, the Candelaria. His concert hall, under a luminous dome, looks like the UN headquarters in New York.

The palace rises on four floors and has a roof terrace. Its structure is inspired by the New York skyscrapers, is marked by the Gothic influence. This building bears the name of the general of the Colombian Liberal Party, Rafael Uribe. Today considered as a national museum, it has a permanent exhibition gallery which is open to the public.

It is a church built in the salt mines of Zipaquira, an hour and a half drive north of Bogota. The first cathedral was erected by the miners in 1954, but threatened with collapse, it was redesigned and rebuilt in the 1990s. It is valued as cultural, religious and environmental treasure which is still cherished by Colombians. Pilgrimages are still organized there to this day.

Cartagena de Indias, the pearl of the Caribbean, is today one of Colombia’s major tourist destinations. The city was founded in 1533 by the conqueror Pedro de Heredia at the beginning of the Spanish colonization. It has one of the most complete systems of military fortifications in South America. The fortified city is now classified as a UNESCO World Heritage Site.

An important place of worship and pilgrimage in Colombia is the Sanctuary of Las Lajas located in the south of Colombia on the Ecuadorian border. The neo-Gothic church is built astride the gorges of the canyon formed by the Guáitara river. The legend says that it is at this precise place that a mute little girl would miraculously have recovered the ability to talk, thanks to Apparition of the Virgin Mary.

Known as the first church built in South America, Santa Marta Cathedral still illuminates the central square with its white mantle which has endured centuries. Mother of all the churches in Colombia, it remains a strong emblematic cult place.

The COLTEJER building is one of the highest towers in Colombia. Commissioned in 1972 by the Colombian Textile Company (tejido in Spanish), it now houses offices over 175 meters in height. Its needle shape recalls the important industrial development of textile in Medellin in the late sixties.

Thus, the Bacatá tower of Bogotá is still under construction. It will soon dethrone the Tower Colpatria by height and will become the highest skyscraper of the country. The architecture in Colombia will keep on evolving. The main challenge will be to preserve the different architectural styles on this land full of history.

Write to us or suscribe to our newsletter

Top 10 of the most beautiful architectural works in Colombia

Bogota and its Street Art