For nearly 70 years, Colombian artist Fernando Botero has been reinventing Colombian society and history with his works in plant-like forms, often humorous, sometimes denunciatory. Sometimes painter, sometimes sculptor, Botero is one of Latin America’s best known artists. His sculptures are now part of the urban landscape of major international cities and his work is…

For nearly 70 years, Colombian artist Fernando Botero has been reinventing Colombian society and history with his works in plant-like forms, often humorous, sometimes denunciatory. Sometimes painter, sometimes sculptor, Botero is one of Latin America’s best known artists. His sculptures are now part of the urban landscape of major international cities and his work is exhibited in the largest art museums and in particular at the Botero Museum in Bogota, capital of Colombia. A small overview of where to admire the Colombian maestro’s work.

Born in 1932 in Medellinin the department of Antioquia, Fernando Botero grew up without his father, who passed away all too soon. He attended high school in the city’s Bolivariano College, from which he was quickly expelled for writing an admiring article about Picasso and his non-conformism in art. When he was twelve, his uncle, a great bullfighting enthusiast, sent him to a bullfighter school in Medellin. This two-year experience would be a great source of inspiration for his first drawings and future paintings. At the age of 19, he exhibited his work alone for the first time in Bogotá at the Leo Matiz Gallery. Fernando Botero lived in different cities such as Mexico City, Bogotá, New York, Paris and Madrid and his paintings are influenced by the great masters of Spanish and Italian painting. Fernando Botero’s works are instantly recognizable by the imposing volumetric forms of his subjects.

“My work is inspired by many things: Etruscan art, pre-Columbian art, popular arts. (…) “In fact, the volume allows me to express a certain form of sensuality, of plasticity. (Euronews interview – July 24, 2015)

Where to see Botero’s works in Colombia?

A beautiful collection of Fernando Botero’s works is on display at the museum dedicated to him in Bogotá, in the heart of the historical district of La Candelaria. Following the artist’s donation of 123 of his works and other pieces by international artists to the Banco de la Republica, the Botero Museum was inaugurated in the year 2000. Entrance is free so it’s well worth a visit. On the one hand because the exhibition space is very pleasant and is built around a flowery patio, on the other hand because you can admire the most beautiful works of the Colombian maestro but also discover paintings by Dali, Miró, Picasso…

A native of Medellín, Fernando Botero bequeathed many of his works to the city’s museum. In particular, you can see 29 of the artist’s bronze sculptures on the Plaza Botero, in front of the Museum of Antioquia. These works were made in his studio in Pietrasanta, Italy and are regularly restored by the Museum. It is while visiting the Museum of Antioquia that you can discover the paintings in the room dedicated to Fernando Botero and named after his son, Pedrito, who died in a car accident at the age of 4. In all the museum has 125 works by the Colombian artist.

Walking through the sublime Cartagena de Indias you will discover in the Plaza Santo Domingo, in front of the church of the same name one of Fernando Botero’s sculptures entitled “Mujer reclinada” (Reclining Woman). If you have the means, you can also rent the house of Lina Botero, his daughter in the heart of the colonial city. An old colonial house with 10 rooms, with pool, patio, furnished with taste. http://www.casadeindias.info/es-es/ 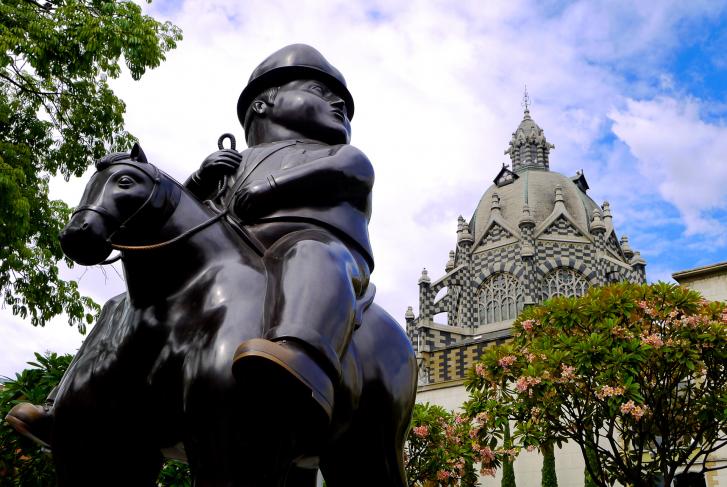 Where to see Botero’s works in the world

This exhibition presents the rich production of the Colombian master from a new angle through the prism of his artistic and cultural affinities with Pablo Picasso. This imaginary dialogue intended by Botero with the great master of modern painting is nourished by common roots and pays a vibrant tribute to Picasso.From November 24, 2017 to March 11, 2018, you can discover the exhibition “Botero, dialogue with Picasso” at the hôtel de Caumont in Aix-en Provence.

On the occasion of its 85th anniversary the Thomas Modern Gallery presents an exhibition of works by the Colombian master Fernando Botero at Open art. Paintings, drawings, and sculptures spanning 3 decades will be on display, offering an impressive overview of Botero’s inimitable artistic work.
From September 8 to November 4, 2017, Gallery Thomas Modern, Türkenstrasse 16 Munich, 80333, Germany

“Hombre a caballo”, Garden of the Museum of Jerusalem, Israel

Aventure Colombia offers a visit to the Botero Museum as part of its stay in Bogotá for 3 days/2 nights.
Feel free to contact our travel consultants on this form.