Bordered by the beaches of the Atlantic Coast and the Pacific Coast, the department of Chocó has an enormous tourist potential and although some economic and security problems persist in that territory; it is always possible to find idyllic, green and wild places such as those that Aventure Colombia can make you discover.

!Deserted beaches in the Caribbean, if they exist

North of Chocó, on the border with Panama, are the town of Capurganá and the bay of Sapzurro. They are popular destinations for Colombians in December and during Semana Santa; however, the rest of the year these paradisiacal beaches and their surroundings enchant with their tranquility. Such is the case of Playa Soledad, Bahía Aguacate or Cabo Tiburón. There is no existing route to get there, it is necessary to take a boat from the city of Turbo, accessible by bus from Medellín or Montería.

Watch the miracle of life in the Utría Park

More to the south, on the Pacific coast is the Utría National Natural Park. Here takes place every year a magical spectacle that must be seen at least once in a lifetime: the birth of the humpback whales. They travel thousands of kilometers each year from Antarctica to come and settle between July and September in the temperate waters of the Chocó. In the video of Aventure Colombia you can appreciate the beauty of this wonderful park. The Utría Park extends across 54,300 hectares and has an exuberant ecosystem composed of beaches, corals, mangroves and jungle, as well as an extensive variety of animals.

Dolphins and diving in the heart of Pearl Harbor

So far we’ve only talked about whales, but if you want to see dolphins, you should head to Huina, in the north of Utría Park, about 30 minutes by boat from the town of Bahía Solano (which has the José Celestino Mutis Airport). The waters of Huina are crystal clear, there you can practice caching or just enjoy this magnificent beach.
Ten years ago, the warship ARC that participated in the battle of Pearl Harbor, was intentionally sunk in Huina forming a magnificent artificial reef for diving. Thanks to the fact that Huina has some hotels and restaurants you can enjoy a few days there and be seduced by its tranquility.

The Pacific coast enjoys some of the best surfing beaches in Colombia. A large number of young Afro-Colombians have been initiated in this sport thanks to the Choco Surf Club. It is possible to see them in Nuqui surfing in the middle of the whales! In addition, if you want to take a course or rent a bodyboard, you can find everything you need at the Ecolodge El Cantil. To relax after the intense activity you can take a dip in the hot springs not far from the Ecolodge.

Don’t hesitate any longer, come and discover the Chocó with Aventure Colombia, an experience that will not let you down! 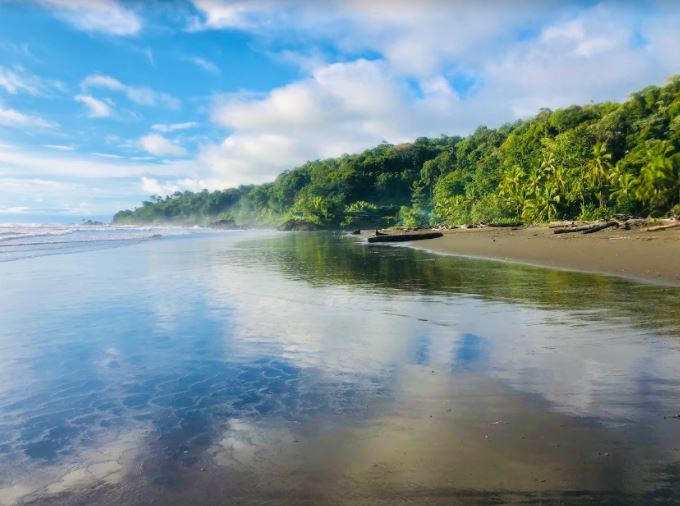